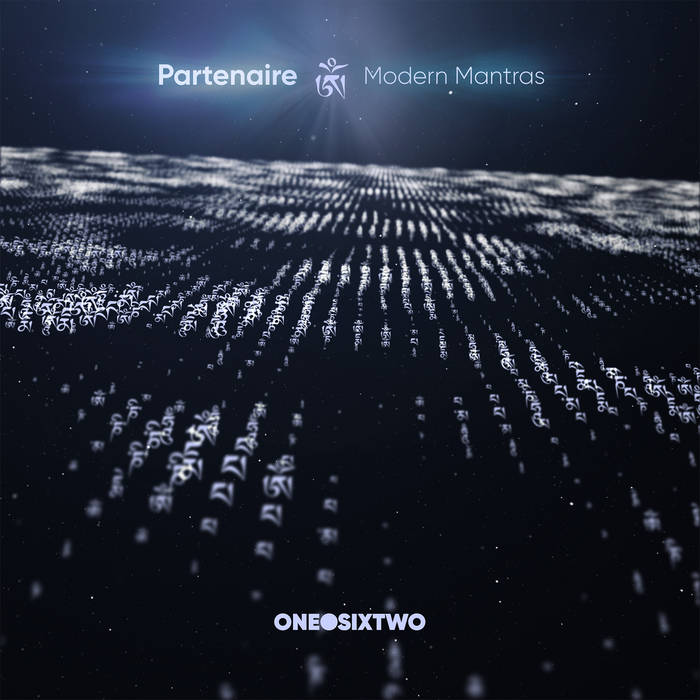 Surfacing out of Buenos Aires, one of the world’s Progressive hives, Partenaire has crafted music for some of the genre’s most forward-thinking labels like Juicebox Music, Transpecta, ICONYC, Serendeep, and our beloved onedotsixtwo, which has become a sacred ground for the producer, as he returns to the UK imprint for the fourth time since its inception. Following his appearances in our first two compilations, Tripswitch’s ‘In At The Deep End’ and Gustin’s ‘Synchronicity’, and his acclaimed ‘Convergence’ EP in collaboration with Sebastian Sellares, the Argentine artist is now set to release his biggest creation to date with ‘Modern Mantras’.

A career-defining snapshot of Partenaire’s sound and vision, ‘Modern Mantras’ is a deep journey inside, a quest for inner truth in turbulent times. Born out of isolation, these six tracks provided an anchor and bestowed a sense of purpose upon the producer. A mission, or maybe just vagaries of the mind, the record was created as both the darkness in one’s own tunnel and the light we find at the end of it.

Opening up the portal with ‘Rephlex’, Partenaire shows a lesser-known facet of his repertoire, as the producer imagines a nu-breed kind of liquid D’n’B where heavy-handed percussion takes the fore to contrast with dreamy imagery, breaking like a violent sea against the coast as we marvel over a first sunrise. It’s that injection of life, a lust for life; pure drive. Down the rabbit hole, the seminal ‘Modern Mantra’ twists and turns over a delectable bassline and sultry percussive patterns while reversed synth stabs and an iridescent arpeggio intertwine to hit that ever-so-sweet spot, leading down to a crystal-clear breakdown where thoughts find a piece of mind. Proper progressive.

Deep in the tunnel by now, Partenaire starts to feel the weight of past doubt, and in an attempt to let the past be, he conjures the otherworldly ‘The Seance’. Summoning a gate to the prison where his demons lie, he delivers one of his finest grooves, rolling with poise and self-confidence. Cheeky and sensual, ‘The Seance’ runs over some of the record’s most eye-catching percussion and dazzling synthwork as the producer goes straight in for the kill. A dead-eyed stare into the abyss, as he knowingly seeks for answers that he might never find. It’s a place where we’ve all been before, a pain that we are used to.

Shrouded in darkness, Partenaire remembers his mission and sets controls for the heart of the sun as he discovers uncharted depths in ‘The Lights We Bend’. Contorting at will, an acid-drenched leadline glows like a beacon, revealing the inner wonders of his own personal tunnel. Gorgeous ambiances and vocal swells abound like lost treasures in a forgotten underwater trove, masterfully contrasting against a violent backdrop built on sheer power, drilling away at the last wall before our protagonist is able to find his true self.

Embracing a newfound revelation, the Argentine producer finds himself in a new light, brimming with colors that have never been seen before. ‘Matteria’ manifests as raw, unbridled energy. A place where he can re-create his future, as he builds an ever-shifting landscape that rises unchecked with every synth swell and poignant stab, evolving with each beat as it transmutes into a force to be reckoned with.

While entrancing and enchanting, this place and the answers found must converge with reality. Partenaire needs to ‘Surface’, following the beaming lights home. The journey must fulfill a purpose, a reason for growth, and so, the producer navigates through the last groove as beautiful arpeggios propel the frame upwards, rising in true progressive fashion. Mesmerizing, ‘Surface’ weaves a prismatic tapestry that dazzles with every bursting sonic bubble for a grand finale. One that presents Partenaire under a bright new light.

‘The only way out is through’ - Robert Frost

Bandcamp Daily  your guide to the world of Bandcamp

outré black metal, with a Victory Over the Sun interview and music from Liturgy and Jute Gyte.